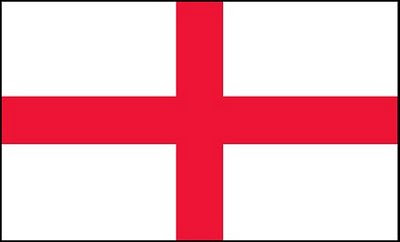 Happy St George's Day! I'm English and proud of it. Our Government seems determined to wipe out the English at the expense of being "British" which is why St George's Day is rarely celebrated these days. I think we should fly our flag more, and take pride in our country and its people. I stopped saying I was British some years ago and now I always say that I'm English, from England. I've no doubt that before long I'll be committing a criminal offence by doing so! Such is life....

I did see the following on Yahoo which cheered me up a bit...


Civic and church leaders have joined calls for greater emphasis to be placed on St George's Day.

An apparent reluctance to display too much patriotism and the perceived difficulties of aligning national pride with the concept of a "United Kingdom" have pushed the patron saint of England's day onto the sidelines.

He said: "I believe that the feast of St George, the patron saint of England, is a day that we should celebrate.

"It's important that young people in this country rejoice in the land that they live in and have a sense of national pride and identity.

"It is time to recognise collectively the enormous treasure that sits in our cultural and spiritual vaults."

His comments came after the Bishop of Rochester, the Rt Rev Dr Michael Nazir-Ali, called for Church of England clergy to hold dedicated services to celebrate the "glorious heritage" of St George.

Creating a new public holiday would turn the occasion around from an event that has lost relevance, according to a survey of 7,000 users of social website MySpace.

Mayor of London Boris Johnson said St George's Day had been "ignored" for too long and has organised a series of free events in the capital as well as ordering the English flag to be flown outside City Hall.

Though I did have to smile at the surnames of the two religious figures calling for a greater recognition for St George - Mr Sentamu and Mr Nazir-Ali. Be nice if we could hear the same enthusiasm from the Smiths, Joneses, Browns, and yes, even the Darlings of this great country of ours. Oh, I forget, the top Brown is Scots.... hmmmmmm


Meanwhile, the petty officials who now run our lives in the UK continue to demponstrate how small-minded and mean-spirited they can be....

A woman who removed her elderly mother from a care home amid worries over her health was shocked to see police and social workers on her doorstep with a battering ram ready to snatch her back.

Rosalind Figg was concerned about the treatment her elderly mother was receiving and took her home to look after her personally.

But social workers in Coventry disagreed with her actions and used a little-known power to take her back.

They obtained an emergency warrant from magistrates under the Mental Health Act on the grounds that a "person believed to be suffering from a mental disorder is being ill treated and neglected".

Two days later they turned up at Mrs Figg's Keresley home with police in tow as back up.

Mrs Figg was forced to hand over her distraught 86-year-old mother Betty who was wheeled to a car with a blanket over her head and returned to Butts Croft House.

A police spokesman said: "Police were asked to assist social services to remove an elderly woman to a place of safety.

"A warrant was granted and an enforcer was taken in order to gain access to the property if needed. The enforcer was not used."
Posted by Stephen Leather at 3:52 AM

Unfortunately the George flag has been hijacked by the far right, and now used to symbolise racial superiority.
This was the excuse used by my local authority in 1999 when a group of council workers attempted to fly the flag on St Georges day.
Its somewhat annoying that we the English are seen as oppressors and villafied in popular history such as film.
I suppose there is no point in being proud of a nation that has stood up to oppresion, outlawed slavery,made a stance against terrorism, and at its own expense fought wars in the name of liberation and offered a sanctuary to those being persecuted, all at a great expense to itself.
I am now technically an Australian, but at heart I will always be English, proud of it too.