My new Jack Nightingale book, Nightshade, is out in paperback in June.  It was published as a hardback and as an eBook on April 25.

By way of an experiment, my publisher Hodder and Stoughton has agreed to cut the price of the eBook of the first in the series, Nightfall, to just 99p.  Yes, less than a quid!

I think that's an amazing deal.  It only applies to the UK as Nightfall is published in the US by Amazon's imprint 47 North. 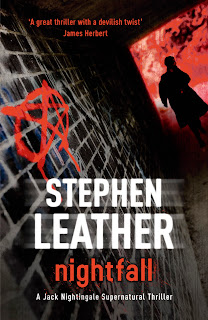 Hodder have also agreed to cut the price of books two and three, so for the next three weeks at least the Midnight eBook will be priced at £2.99 and the Nightmare eBook at £3.99.

It's very much an experiment and if it works I hope to persuade them to continue to sell them at the special low price.

Here's the synopsis of Nightfall, the first book in the Jack Nightingale supernatural thriller series. 'You're going to hell, Jack Nightingale': They are words that ended his career as a police negotiator. Now Jack's a struggling private detective - and the chilling words come back to haunt him.

Nightingale's life is turned upside down the day that he inherits a mansion with a priceless library; it comes from a man who claims to be his father, and it comes with a warning. That Nightingale's soul was sold at birth and a devil will come to claim it on his thirty-third birthday - just three weeks away.

Jack doesn't believe in Hell, probably doesn't believe in Heaven either. But when people close to him start to die horribly, he is led to the inescapable conclusion that real evil may be at work. And that if he doesn't find a way out he'll be damned in hell for eternity.
Posted by Stephen Leather at 2:54 AM 2 comments: