Cursed is published, Nightmare is out January 19 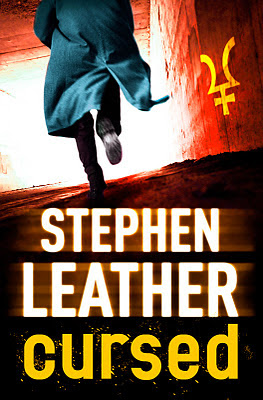 Cursed is now available as a free short story on Amazon UK. It's not available in the US yet as Amazon Encore will be publishing it in 2012. So if you've got a Kindle, you can get it free on Amazon. If you haven't got a Kindle, get in touch through Facebook and I'll send you a PDF.

Nightmare, the third book in the Jack Nightingale trilogy, will be published on January 19. I've already signed a contract to write two more Nightingale books for my publisher Hodder and Stoughton. And I have a brilliant idea to be going on with!

I hope you all had a great Christmas and that you get what you want in 2012. I want another book at the top of the Amazon Kindle Bestseller chart in the US and the UK (The Basement managed it in 2011) but I don't think it'll be easy!

I'm pretty proud of the fact that The Basement topped both charts and sold more than 160,000 copies in the UK, making it the third bestselling book in the UK according to The Bookseller magazine.

This is what The Bookseller had to say -


The number one title is Confessions of a GP, the Benjamin Daniels hit that has been in and around the the weekly chart for much of the year, thanks to some smart pricing decisions and marketing from publisher The Friday Project: in print the book has sold just 8,500 copies in UK, but has been downloaded more than 100,000 times.

Stieg Larsson's The Girl with the Dragon Tatoo is in second place (and with the US film version of the book now out we can expect sales to once again begin climbing), ahead of two Stephen Leather titles, one self-published and now part of the AmazonEncore programme. David Nicholls One Day, a print and film success over the year, comes in at fifth, ahead of the next two Millennium titles, with A Game of Thrones, Room, and The Hanging Shed, making up the remainder of the top ten.

Despite having no titles in the top ten, Transworld is actually the most successful publisher in the top 50 with five titles, though among the big groups the spoils are won by Hachette, which has 11 titles in the list compared with Random's nine. There are fewer self-published titles than one might have thought given all the noise they generate, but of course this is not just a Kindle chart, it includes chart positions from the likes of Waterstone's and W H Smith, where self-published titles gain little light. There are, of course, no self-published books in the equivalent print chart.

The chart is dominated by fiction, and in particular adventure/thriller novels. There are 30 such books in the digital top 50 compared with just 12 in the print equivalent. In non-fiction the highest charting book is Life and Laughing by Michael McIntrye, which at 16 is 22 places ahead of the next contender, Madeleine by Kate McCann. The McInyre title was of course last Christmas' big Christmas hit—unlike in the print chart there are barely any Christmas biggies from 2011, in particular not a Jamie in sight. James Corden does, however, sneak in at 47—he has shifted 130,000 print copies too.

The average selling price of the top 50 on Amazon was just £3.50, with 10 available for less than £1. In the printt char, the equivalent price was £6.60 with just one book (The Official Highway Code) retailing at under £4.

Ignoring the self-published titles, there are two e-book originals in the top 50 Lee Child's Second Son and Karin Slaughter's The Unremarkable Heart. Given the announcements coming out from publishers towards the end of this year, I think we'll see more originals and shorter works in next year's Top 50.

That's what The Bookseller had to say, but actually I'm pretty sure that The Basement was Number One and not Number 3. I was much higher in the charts than the GP book for most of the year. The Bookseller has pretty much ignored me over the past year, despite the fact that I sold close to half a million eBooks. When I had three books in the UK KIndle Top 5 Bestseller list I emailed the magazine but they weren't interested. And when they did start running their own eBook chart they rarely mentioned me. I guess that's because their survival depends on the traditional publishers, self-published authors really have no interest in a publication like The Bookseller, which makes much of its money from advertising from publishers. They did put me in their list of the Top 100 influential people in the publishing business, though, which was nice of them. The Bookseller has been making predictions of what the industry will be like over the next year or so. Well, I have a few predictions of my own, but I'll wait until the New Year before revealing them!
Posted by Stephen Leather at 5:34 AM 6 comments: