It's set in Afghanistan in 2002 and is about the time that he got shot. I'm well pleased with it - it's action all the way and gave me the chance to tell a war story which was terrific fun.  There are some old friends in the story including Major Alan Gannon and Geordie Mitchell, who appear in several of the Spider Shepherd books 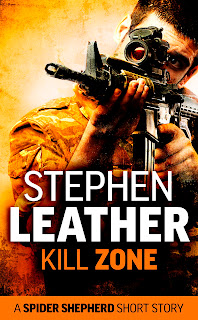 In many ways Kill Zone is the prequel to the new Spider Shepherd novel that I'm writing now. It's called True Colours and much of what happens in that book is influenced by what happened to Shepherd back in 2002.

You can download Kill Zone for the Kindle - HERE
Posted by Stephen Leather at 11:29 AM

Have just down loaded the Spider Shepherd short story and amlooking forward to reading it.

Have just downloaded the new Spider Shepherd book and am looking forward to reading it. Carolyn Good news on Take Two's progress in the charts.