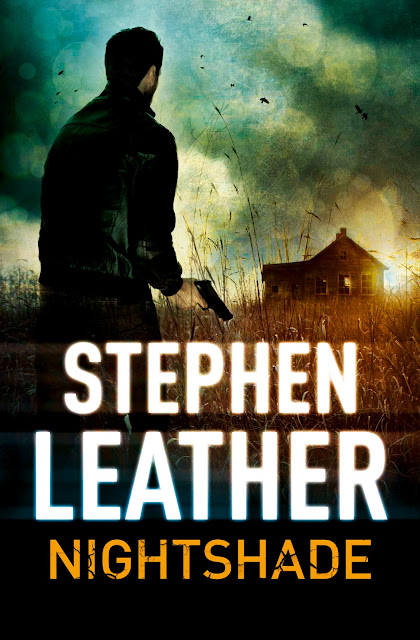 I'm flat out on the new Jack Nightingale book at the moment - it has to be done by the end of October.  Should be okay as I'm in full flow!  It's got a much higher body count than the previous books, which always helps!

Hodder have come up with a cover idea but it's not quite right - mainly because Jack rarely uses a gun and is more at home in cities than fields.  I also think the guy with the gun has a beard, which is very un-Nightingale. And Jack isn't a fan of bomber jackets.  I should get another cover in the next week or so - hopefully with Jack's trademark raincoat and satanic symbols!

I am having great fun with Nightshade, there's a fair bit of real police stuff in it but some very nasty black magic, too. If all goes to plan it'll be in the stores next April.  As I'm writing Nightshade I'm also researching the new Spider Shepherd book - more on that later!
Posted by Stephen Leather at 9:48 AM

Home stretch is great. So I guess you're hiding out in Dublin? Good luck, david

Home stretch is great. So I guess you're hiding out in Dublin? Good luck, david

So looking forward to Nightshade loved the other three.

dont think i can wait till april but suppose i'll just have to . read nightfall,midnight and nightmare in record time and now i'm hooked.cheers and thanks in advance for nightshade

Can not wait. April seems miles away . Looking forward in reading it

Obviously looking forward to it,especially seeing how you deal with taking the 're-set' forward!
But the guy with a gun cover doesn't work for me, it's the current fad with cover artists for thriller writers, and does not feature your supernatural aspect...

So I took a chance on the first of your Nightingale series. Normally, I do not try authors I have not read before. This is especially true of those on the Kindle store. I have to say, I was beyond impressed. I finished the first yesterday and the second only moments ago. My only complaint is having to wait until next month for the third installment. I would also like to thank you for giving me a new author to add to my rather limited list.