Fair Game Is An Amazon 2011 Favourite! 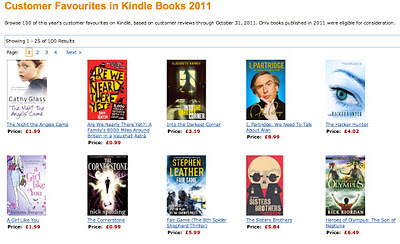 Amazon has just released it's list of favourite Kindle books for the year ending October 2011 - and Fair Game is in the Top 100, right next to Nick Spalding's Cornerstone.

The list is based on customer reviews and it's great to see Fair Game there as it's not a cheap book by any means. My self-published eBooks The Basement and Once Bitten have each sold almost ten times as many as Fair Game, but for most of 2011 they were on sale for the Amazon minimum.

I'm hard at work on the new Spider Shepherd book as we speak. I was supposed to finish it before autumn but I got held up doing the reseearch and now I'm aiming for the year end with publication due in July 2012. No title yet!
Posted by Stephen Leather at 2:15 AM

Really good news, hope it won't be too long before you can finish the next Spider Shepgerd book, what is its thene?

Sounds great - just reading Fair Game now (having read the others back to back) can't wait for the new one!