40th Review For The Bestseller 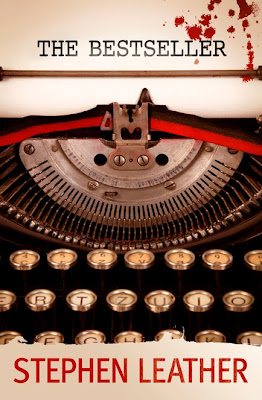 Yeah, my eBook The Bestseller just received its 40th review - and thankfully it's with five-stars. And it's from someone using their real name, too, which I always take as a good sign.


5.0 out of 5 stars Quick and enjoyable..., 7 Nov 2011
By A. J. Philpott "mightyyid" - See all my reviews
(REAL NAME)
This review is from: The Bestseller (Kindle Edition)
Nice good easy read, and great for train rides and given the seemingly smaller length, it is not as intrinsically captivating as a long novel that Mr Leather is renowned for, but at the same time it's an easy read that captivates from start to finish. All in a ll a good solid read that was quite enjoyable.

So thanks very much for the review, Mr or Mrs Philpott - you made my day.

I'm less taken with a reviewer who hid behind the name 'Waylander' who took the time to give every single one of my books on the Goodreads forum a one-star vote. The reviews only stayed up for a few days before they were taken down. I'm not sure if "Waylander" had a change of heart or if the Goodreads moderators removed them, but it doesn't matters in the grand scheme of things because my books have so many four and five star votes that the odd one star doesn't make any difference. I do think it's a shame that websites like Goodreads and Amazon allow anonymous postings. Everyone is entitled to their opinion, on authors and on books, and providing they aren't libelous or offensive they have every right to express their opinions. But there are people who use anonymity as an excuse to behave badly, and really something needs to be done about that. If someone wants to give a book a negative rating that's all well and good, but at least they should have the courage of their convictions and use their real name. I post reviews under my real name and stand by them. And whenever I post on a public forum I use my own name. I would never post a negative review under an alias. That's just cowardly.

On a more productive note I'm flat out on a new Jack Nightingale story which Hodder and Stoughton will be using to publicise my new Nightingale book - Nightmare - which will be published in January. I hope to have it finished by the weekend.... It's about a gypsy's curse and I'm having great fun with it....
Posted by Stephen Leather at 1:11 AM

Thanks for "like"-ing my review of Rough Justice. It deserved every one of its five stars! Also, as when you went to the trouble of emailing me when I reviewed Long Shot on my blog some years ago, it's very much appreciated to know that authors are genuinely interested in their readers' opinions.

I do have a few of your books on my "to read" shelf and am getting a tablet for xmas, which means I'll start picking up those Kindle ones!

The one thing I've never been by one of your books is disappointed - but I still rate The Chinaman as the best :)

And why don't you tell your readers that the reason somebody called 'Waylander' gave your books 1-star ratings was because YOU first gave author Steve Roach 1-star ratings on all of his books in an act of spite.

On reflection, I can't believe that the above comment is genuine. I doubt that the real Steve Roach would start calling me a twat on my blog only days after apologising for calling me a douchebag on the Amazon forum. As he knows that my lawyer is making copies of all malicious and libelous statements it would be a crazy thing to do. So I guess it's just someone pretending to be Steve to wind me up! Nice one. Had me going there for a moment! Hopefully my computer guy will track the real culprit down before too long - I'll keep you posted!

This story's better than the plot of one of Roach's novels...

[note - I've never read a book by Roach, nor have I heard of him before. This post for humour value only. I gather this precludes me from legal action. Unless you're Robin Hood Airport, in which case you don't have a sense of humour]