Black Ops, the 12th book in my Spider Shepherd series - is off to the printers.  I'm well pleased with it, I think it's a cracker of a story.

Hodder and Stoughton have already decided that this is the cover, I think. 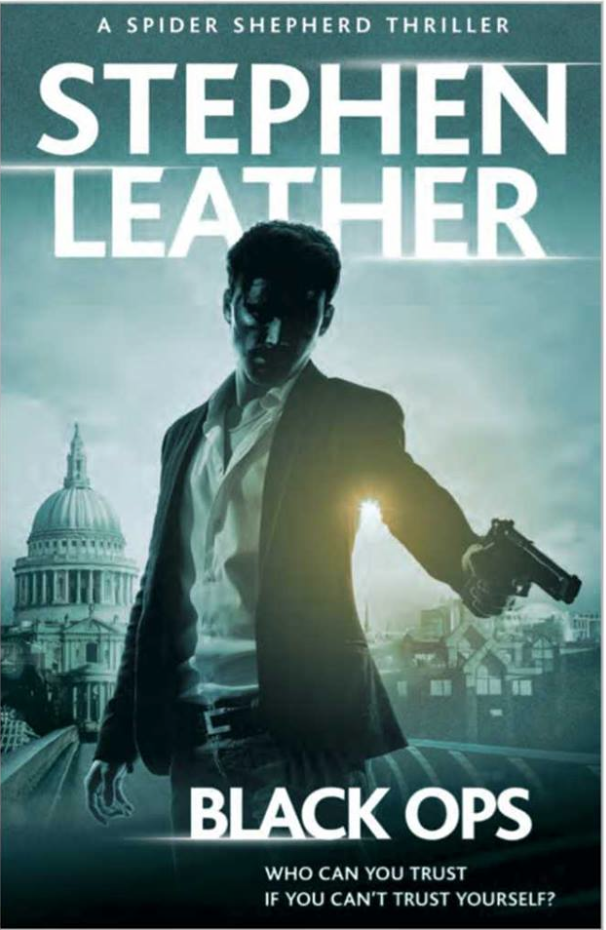 
WHO CAN YOU TRUST IF YOU CAN'T TRUST YOURSELF?
Spider Shepherd's MI5 Controller, Charlie Button, has gone rogue, using government resources to get revenge on the men who killed her husband. Spider is told to betray her. Worse, he's asked to cooperate with his nemesis at MI6, Jeremy Willoughby Brown, in taking Charlie down. And he will have to cross the assassin, Lex Harper, currently on the trail of two Irish terrorists, who may be able to lead him to his ex-boss.
Meanwhile, Spider's sixteen-year-old son is caught with drugs, expelled from school and threatened with prosecution. But the drug police offer Spider a deal: go undercover, unmask a local dealer and his son will go free. Spider has no option but to cooperate. But is he any better than Charlie, using work resources to resolve personal issues?
There's little time to debate because another high profile mission is about to engulf him. President Vladimir Putin is about to visit the UK and a father who lost his son on the downed Malaysian plane over the Ukraine holds Putin directly responsible for his death and wants revenge. Along with everything else, it's down to Spider to stop the assassination of a head of state on British soil.


Despite it being a complex plot, it took less than four months to write. The edit was done in a couple of days and the line edit took another day to check.  It was plain sailing all the way, pretty much.

One writer who thinks that way is David Harrison, who writes under the name Tom Bale. YOU CAN READ A RECENT INTERVIEW WITH TOM BALE HERE

This is what Tom Bale says about rewriting -

The fact that his second draft takes longer than the first suggests that there was something very wrong with the first draft. Which is perhaps why Tom Bale has recently been dropped by his former publisher, Random House - and has had to sign with a new agent. In my experience publishers and agents don't want writers doing rewrites after rewrites - they much prefer the writer to get it right the first time.

I always think of writing as akin to painting, really there's no excuse for not getting it right the first time. I doubt that DaVinci finished the Mona Lisa, took a step back and said "You know, I think she'd look better as a blonde and maybe I'll change the smile to a frown".  That's not how painters work, they improve their art as they go along.

In fact it's the same with any profession. You wouldn't trust a cosmetic surgeon who said "I'll have a go at your face lift. The first version probably won't look that good but we'll be able to have another go at it."

Or a mechanic who said he'll fix your brakes "but it won't be perfect, you go away and tell me what's wrong and I'll try again."

In fact I can't think of another profession - other than maybe computer programmers - who hand in a 'finished' job that clearly isn't fit for purpose.

Don't get me wrong. The best advice you can give to a writer starting off is to write every day. And yes, it's fair to tell them that anything they write doesn't have to be perfect first time because it can always be improved.

But that's for amateurs. For wannabes. For writers who are learning their craft. Things change once you're a professional. Any writer who hands in a first draft and then receives pages of notes from an editor and a request for a complete rewrite really has failed in his job. And if that rewrite isn't perfect and requires another rewrite, then something is badly wrong.

Writing isn't easy. It's time consuming and it's challenging. But time and time again I hear writers complain that producing a book is like pulling teeth and that they have to go through rewrite after rewrite before their book is publishable.  Writer's write, that's what they do. Anyone who complains about the process isn't a real writer. And real writers don't hand in work to a publisher until it's pretty much perfect. So yes, the best advice to any writer when they are starting out is to write every day and not to worry too much about the quality. But once you are a professional, once you earn your living from the words you produce, then the work you hand in should be fit for purpose. Anything more than a simple tweak or polish means you have failed.

So what now?  I'm working on a stand-alone ISIS thriller set in London. I've done 36,000 words and it's really, really good.  I can't tell you the title because it's quite special, but one I rejected early on was "Nine Guys Called Mo".  Seriously!

There's a character called Lex Harper in Black Ops (he was Spider's spotter in Afghanistan) who is a drugs baron and part-time assassin. I'm planning a book in which he'll be the main character, maybe even a series.

And I'm hoping for more Jack Nightingale short stories, maybe even a new novel. Busy, busy, busy. But every moment of it is a blast!
Posted by Stephen Leather at 2:04 AM

Charlie's gone native? Wow, wasn't expecting that one. Sounds like we have some great stuff to look forward to!

Rogue rather than native, but yes, it is a bit of a shock for Spider!