White Lies - The Cover Is Ready

The cover for the new Spider Shepherd novel - White Lies, which will be published in August by Hodder and Stoughton - is pretty much done, and I love it! 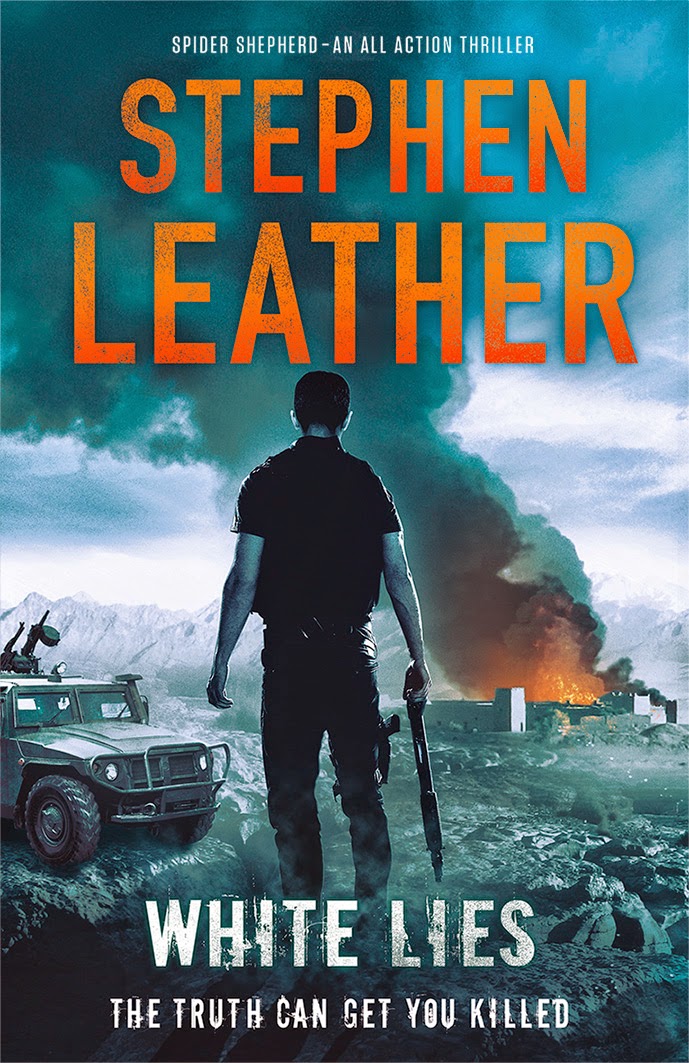 I'm really pleased with White Lies, it's more action-packed than previous books, with Shepherd heading off to the badlands of Pakistan to rescue a former protege who has been kidnapped by al-Qaeda.

The tagline at the bottom - The Truth Can Get You Killed - is mine.

I also had a hand in the writing of the blurb - the copy that goes on the cover and which is a vital marketing tool.  Most people do indeed judge a book by its cover, and once they've looked at the picture they go on to read the blurb (hopefully). Blurbing is an art - that and the cover are often the two main selling points of a book. A good blurb can sell a book, and a bad one can condemn it to oblivion.

I learned about blurbs many years ago watching my then editor Bill Massey. Bill handled my breakthrough book The Chinaman and his blurb was as close to perfection as you can get.

These days I often have a lot of input into my blurbs. Blurb writing is a totally different skill to writing a book. The trick is to sell the book to the potential buyer without giving away too much of the plot. Punchy, active sentences work best and you need to keep punctuation to a minimum.

Here's a suggested blurb I was given for my new Hodder and Stoughton book, White Lies, which will be published in August.

When Osama Bin Laden was killed in Operation Neptune Spear in May 2011 there was a British observer on the US-led mission. Dan ‘Spider’ Shepherd along with Raz Chaudry was at the heart of a high-risk MI5 intelligence probe which uncovered Bin Laden’s hiding place. Shepherd’s place on the raid was his reward for favours rendered.

Now Raz has been sent back to Pakistan on a near-suicidal mission to infiltrate an al-Qaeda terrorist cell. He’s soon falls under suspicion and tortured for information. Spider will do anything to save Raz’s life even at the risk of his own.  But unknown to Spider and the Pakistani Forces tasked with recovering Raz from a remote desert fort, their mission has been betrayed. A bloody fire fight follows and now it’s Spiders turn to fall in the hands of the vicious extremists. It’s only a matter of time before he or Raz crack and admit their part in Bin Laden’s death.

There’s one chance left to extract them – working behind the scenes, Spider’s MI5 controller, Charlotte Button, pulls strings to bring in America’s finest -- the elite SEALs who carried out Operation Neptune Spear – in a do-or-die operation to rescue the captives.

White Lies is vintage Stephen Leather: fast paced, beautifully characterised, a seat-of-your-pants thriller which will have you hooked from first page until last.

And here's the blurb I wrote, using the above words as a starting point:

Dan ‘Spider’ Shepherd is used to putting his life on the line – for his friends and for his job with MI5.  So when one of his former apprentices is kidnapped in the badlands of Pakistan, Shepherd doesn’t hesitate to join a rescue mission.

But when the rescue plan goes horribly wrong, Shepherd ends up in the hands of al-Qaeda terrorists. His SAS training is of little help as his captors beat and torture him.

Shepherd’s MI5 controller Charlotte Button is determined to get her man out of harm’s way, but to do that she’s going to have to break all the rules.  Her only hope is so bring in America’s finest - the elite SEALs who carried out Operation Neptune Spear - in a do-or-die operation to rescue the captives.

White Lies is a fast paced, seat-of-your-pants thriller which will have you hooked from the first page until the last.

My blurb is shorter, and I do believe that shorter blurbs work best.

My blurb concentrates on the hero - Spider Shepherd - because it's the hero that you're trying to sell. And it spells out the danger the hero's facing.

It's less cluttered and I think it's easier to read.  Will it sell the book?  We'll have to wait and see!

Posted by Stephen Leather at 10:03 PM