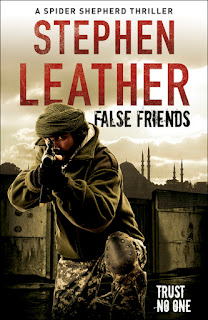 False Friends is out, and selling well.  It’s already in the Top 100 on Kindle and is in all good bookshops and supermarkets.

There are two new characters in the book that I’m really pleased with. Harveer “Harvey” Malik and Manraj “Raj” Chaudhry, British-born Pakistanis who have infiltrated an al-Qaeda cell on behalf of MI5.

Because they are innocents in the undercover business, Dan “Spider” Shepherd is brought in to babysit them.

Harvey and Raj are great characters and I’m thinking of bringing them back in a novel of their own.  I’ve written Muslim characters before, but generally they’ve been terrorists planning to cause mayhem in the UK.  In False Friends, Raj and Harvey are true heroes, putting their lives on the line for their country.  It was something getting inside the heads of characters so different from me in terms of ethnicity and religion, but I was helped by a pal who is a UK-born Bangladeshi Muslim who gave me an insight about what it’s like to be a British-born Asian Muslim in the UK post 9-11.

I’m already plotting the Spider Shepherd book for 2013 – based on the Russian oligarchs who now call London their home.  There have been a number of Russian assassinations taking place in London and I’m going to involve Spider!
Posted by Stephen Leather at 11:52 PM

Brilliant reading as usual, nearly finished after 2days. One point though, whoever proof reads needs a kick up the arse, at 91% on the kindle app on ipad, location 5642 of 6218, line 28 the text refers to Nightingale, not Shepard.

Brilliant reading as usual, nearly finished after 2days. One point though, whoever proof reads needs a kick up the arse, at 91% on the kindle app on ipad, location 5642 of 6218, line 28 the text refers to Nightingale, not Shepard.

Thanks, David! Yes, we caught it but too late to correct the first hardback print run! I hang my head in shame. The eBook should have been corrected already. Best wishes, Stephen.

Hi mate love your books. I love the nightingale books. Can not wait an till the next one. Keep up the good work. Thanks Darren

Hi Ben - Yes, I'm half way through a book featuring Richard Yokely but I don't know when I'll ever finish it!

Great read as usual, love the Spider books!
As it will be a long wait until next July, might have to give the Nightingale books a go.
Keep up the good work!

Hi Stephen, another absorbing novel. Any chance of a Spider film or two? I can already imagine Helen Mirren as Charlie and myself as Gannon! Roll on the next installments. Tom Brennan

Hi Stephen. Just pulled an all-nighter to get to the gripping end? Excellent stuff? Any sign of Spider appearing on the big screen? I can picture Helen Mirren as Charlie and me making an appearance as Gannon or Razor! Roll on the next installment.

No plans yet for a Spider movie, but my fingers are crossed!

I also noticed the Nightingale slip up! Took me a second to work out what was going on. Stephen, I assume it must be quite taxing writing two novels in parallel?

Yeah, it does get confusing, Matt! I'll try not to do it again!

I've read every Dan Shepherd book so far and have nearly finished this one. I love them, I agree with the above but instead of just a movie, it should be a series as well!!

when I was in school I hated reading; and never read when I left. Until we were waiting to board our flight to Turkey some years later and we saw a bookstore, my fiancée picked a book and so did I (expecting to only read a few pages then play the PSP), instead I read the whole book during our holiday, came home and brought the rest of the series!!

The book was 'Live Fire' , thanks for showing me how fun reading really is!

Not much of a response!

Is the killing of Osama Bin Laden as it actually happened? If not how can you be so disparaging of the navy SEALS?