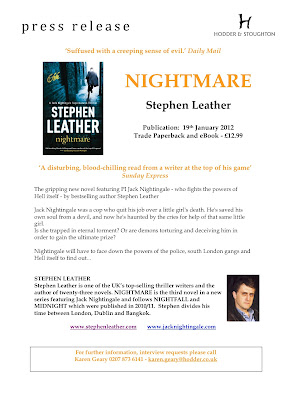 Nightmare, the third book in the Jack Nightingale series, is published tomorrow. Hodder have already commissioned two more, which is good news. Sadly it won't be sold in the supermarkets, which isn't such good news. So you'll have to buy it on Amazon or (gasp) in a book shop! Amazon will be publishing the three Nightingale books - Nightfall, Midnight and Nightmare - in the United States later this year.
Posted by Stephen Leather at 4:18 AM

Loved Nightmare - Great Job Stephen - got it on pre-order and couldn't put it down. Fantastic ending and so pleased to hear we'll be seeing more of Jack Nightingale - excellent series!!!

love the Jack Nightingale novels Stephen,cannot wait to read the next one.Keep up the good work

Great trilogy and really pleased to hear it will become a quintology (?)

Read all three on Kindle on iPad in about 10 days, almost unputdownable...

I have read most of your other books, but wasn't engaged by the synopsis of the Nightingale series... not into Twilight and all that - but this is nothing like that, and I'm glad I took the chance!

Any idea when to expect 4 (in-between the Dan Shepherd novels of course!)

I'm aiming for next January, but I haven't started it yet!

Great book,best of the three but just can't figure how you can follow it. The ending is so fantastic it looks like you've dug yourself into a literary hole!!
Is it possible he might need the help of "Spider!!"

I've read most of your novels and have really enjoyed the three Jack Nightingale ones but with such an imaginative ending I can't see how the promised fourth one could be unless "Spider" comes to the rescue!!