Whew, I finally finished Rough Justice at two o'clock in the morning. It came in at just over 143,000 words. I'll now run it by a couple of close friends to see what they think, and assuming it's ok I'll send it to Hodder next week. If all goes to plan it should be on the shelves in June next year.

As always, there was no great feeling of achievement when I finished. That's partly because I wrote the ending over three months ago, and the final bit I wrote was simply a linking section, tying two scenes together. I just sat back and smiled, stored it, and played internet poker for an hour or so. I did win $65 playing in a tournament and that I did feel like celebrating!

And of course the book isn't really finished. I'll polish it when my friends have read it, then my editor will make broad-brush editing suggestions, then it will go through a line edit, then I have to read the proofs.

And there's no let up on the writing front, either! I have to deliver the new Jack Nightingale book by January, so I have to get right on it. It'll probably be about 110,000 words long....

I already have the plot of the Dan Shepherd book for 2011 sorted - and I will have to deliver that by July/August next year. It's a bit of a treadmill but I'm quite excited about delivering two books a year for the next two years!

The cover for Rough Justice has changed a little bit. Scroll down a bit and have a look at the earlier version and see if you can spot the change. I feel I should offer a prize, but I won't! The change was my suggestion, and while it's tiny it is important! 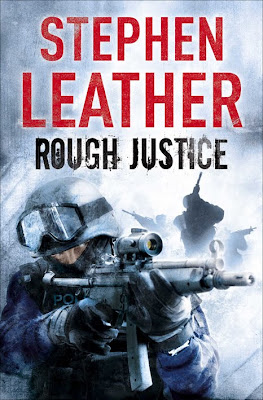 Posted by Stephen Leather at 4:14 AM

what, you named the the guy "PO" after a telly tubby???

Congratulations hugely on finishing. Looking forward to reading it. Better still I can't wait till spider takes on the scammers.

Well done, Cartouche. If there had been a prize you would've won it!

Root of All Evil said...

Instead of POL you should have put DIABLO on it.
Yours to down next time I see you!.......

Took me a few minutes to get it (swear i didn't check in here first!!!). Gonna be tough waiting til July/August to catch up with Spider. Nothing like starting off the New Year with getting my hands on a new Dan Sheppard adventure!!!

Nooooo!!!
Please don't wait until next June to publish the next Spider Shepherd novel Stephen.
As a recently retired policeman I've got time on my hands and am currently re reading all the Shepherd novels for the 3rd time. Excellent but too much time in between novels.