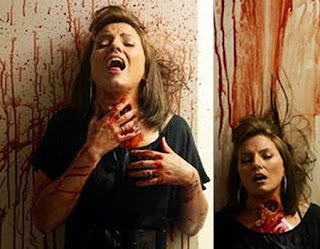 I watched a Channel Four TV show called Dead Set last week, a zombie drama based around the Big Brother show. I’d been looking forward to watching it, and had resisted watching it when it was shown on TV so that I could see the whole thing without adverts and interruptions. I do that a lot these days, especially with comedy shows. Rather than watch them when they go out, I buy the DVDs and watch when I want, usually in one go! I watched all three series of Dexter that way, and I’m currently working my way through DVDs of Seinfeld and Frasier.

Dead Set was quite disturbing, on many levels, and I haven’t been able to stop thinking about it. Basically it’s set in the Big Brother house at a time when the whole population outside are being zombified. Then the zombies lay siege to the Big Brother house and mayhem ensues.
Now, I love zombie movies. 28 Days Later is brilliant, and I enjoyed the follow-up 28 Weeks Later. And I thought that Sean Of The Dead was hilarious. I’m a big fan of George Romero’s zombie movies, too. But Dead Set was just plain disturbing, and I don’t mean that in a good way! Everyone dies in it. Everyone dies and everyone dies horribly. There is no redemption, and no sense that people were becoming better people as a result of what they were going through. Most of the characters were rude, self-centred and just plain stupid at the beginning, and that’s how they were at the end. And it wasn’t ironic in the way that Sean Of The Dead was. Dead Set takes itself very seriously. That’s how it was written, a group of horrible people (mainly) who all die horribly. And at the end you are left with the impression that the whole world has been zombified. It’s the end of the human race.

The DVD came with extras including an interview with the writer, Charlie Brooker, and I found him as disturbing as the show. In fact, he could easily have been a character in the drama and he wouldn’t have been out of place. There’s an interview with him at:

I would argue with him that it was a satire. I didn’t find it in the least bit satirical. Nor was it comic, even darkly comic. It was sometimes ridiculous, but I don’t think that was intentional.

I can’t work out why he wrote Dead Set, and I can’t understand why Channel Four made it and E4 broadcast it. The last episode of Dead Set was only seen by a total of 652,000 viewers, making it the lowest rated episode of the series, so it’s clear that a lot of viewers were getting turned off by it. I’m not surprised. People don’t watch TV just to see pain and suffering, they want to feel good, they want to think that life is a pleasant experience and that people can triumph over adversity. Dead Set was totally nihilistic, totally without heart or soul. I don’t think I cared about any of the characters, and while I might have flinched at the gory way in which they died, I never once felt any sense of loss.

I’m not against killing off characters, some of the best writers do that. I’ll never forget the way Frederick Forsyth has the main character of Dogs Of War, Cat Shannon, kill himself at the end of the book. And I killed off Mike ‘Joker’ Cramer at the end of my book The Double Tap and The Chinaman doesn’t survive the book of the same name. But when you kill off a character there has to be a reason and it has to be plot-driven. Sometimes characters have to die in the story, because there’s nothing left for them to do. Or they have to die because it helps someone else or because it’s for the greater good.

In The Chinaman, the hero had to die because he had lost all his family, he had taken revenge on the men who had killed them, and there was nothing left for him to do. Killing off Mike Cramer was a mistake with hindsight, but as the plot necessitated him having a terminal illness, I was pretty much stuck with his death. If I had used a plot device (magic cure, wrong diagnosis etc) to save his life it would have been cheating.

In the book I’ve just finished, Nightingale (well, rewriting it actually, as we speak!) I do kill off Jack Nightingale’s friend, but there are repercussions and, as it happens, I do sort of bring him back at the end of the book. Of course characters die, in fact in my Spider Shepherd books an average of half a dozen characters die per volume. A thriller without a death or two wouldn’t be a thriller! But killing characters just for the ‘thrill’ of seeming them die is just perverse, and that was why I found Dead Set so unsettling. I suppose you could say that it was reality TV taken to its ultimate level, where people tune in to watch misery and gore, but Dead Set wasn’t a parody, it took itself very seriously and so did the writer. I’m actually sorry that I watched it, which is a terrible thing to say about any creative work. I learned nothing from it, I didn’t really enjoy it, and it upset me. If I did any of those things to one of my readers then I would feel that I had failed.

You might ask why I kept on watching it if it was upsetting me so much – to be honest I kept expecting the Army to arrive to rescue them, or for a cure to be found, or for them to fight their way to safety. I expected some sort of redemption, some sort of hope, but it never came. Even right at the end, where the main female character is leaving the house, I thought that she might escape – but it’s clear that she dies, and dies horribly. As the credits rolled I had a bitter taste in my mouth and it’s still there. It’s so hard to get decent shows onto television these days that I always get annoyed when time and money is spent producing a programme that isn’t worth watching. Channel Four has quite a small drama budget and it seems a great shame to waste it on something as empty as Dead Set.

While doing my recent book tour to promote Live Fire, I saw the Twilight books everywhere, and with such a demand for vampire books I did wonder about writing a thriller about a zombie detective.... I sort of thought he could wander around crime scenes contaminating them because bits of his body keep dropping off, but I’m not sure how successful a series with a zombie hero would be, especially if the dialogue is limited to ‘Urrgggghhhhh!!!’ I think it’ll be one those ideas that just stays as an idea!

I’m 12,000 words into the new Spider Shepherd book and it’s flowing well, though hand on heart I have to confess that I don’t have an ending yet, and not much of a middle!
Posted by Stephen Leather at 2:36 AM

What happened to Bangkok-Bob? He seems to have vanished. Hopefully it´s not for good?

I really look forward to seeing updates on the Bob-story... Try to squeeze Bob into your tight writing schedule if possible!

From Finland with snow,
Temstrong

I'm working on a rewrite of Nightingale, then I have to finish the new Spider Shepherd book (only 12,000 words done!) and then I shall finish Bangkok Bob, promise!