I caught a computer virus this week, a bad one. Luckily I make frequent back-ups so I didn't lose too much work but the whole experience left me very annoyed and frustrated.

I'm annoyed at the moron who spent his time designing a virus for no other reason than to screw up people's lives. One does try to believe in the inherent goodness of man, but computer viruses can only come from the mind of someone who doesn't like people, someone who gets a kick out of working against society. To be honest I don't think there's much of a difference, mentality-wise, between the nerd who spends weeks designing a malevolent computer virus, and the fanatic who plans to blow up a plane or a shopping mall. Both are only interested in destruction and unhappiness.

And I'm annoyed at Norton. Last year I paid almost US$60 for a years subscription to Norton 360, and it was updated and running when I got the virus. It was an absolute waste of money. For years I have always used pirated anti-virus software (usually Norton, bought at Bangkok's infamous Pantip Plaza for US$3). It's the last time I'll be paying for a copy of Norton, of that I'm sure! The first thing that the virus did was to disable Norton 360, and to block my access to the internet. What kind of anti-virus software allows itself to be disabled by a virus?

But I think what I'm most annoyed it is Microsoft. I think that in years to come the world will realise what a great con job Bill Gates and his mates pulled in getting their operating system designated as the world's standard.

I've never liked Windows. When I bought my first lap top twenty years ago I disabled Windows and worked out of DOS, the Disc Operating System. It's years since you've been able to do that. The new Windows, Vista, is constantly asking me to do things that I don't want to do, and when I do tell it what to do, nine times out of ten it asks me if I'm sure, as if Microsoft always knows best.

I like Sony laptops and I pretty much buy a new one every year. But every time I do I am forced to buy another copy of Windows. I've got Vista on the latest, and it's rubbish. Ninety per cent of what comes with Vista is of absolutely no use to me. I was okay with Windows 98, pretty much, and everything else has been downhill from there. I hate Vista, I hated XP, yet because I like to work on Sony laptops, I am forced to buy a copy of the latest version of Windows. Sony will not sell you a machine with Linux or any operating system other than Windows. And if you remove Windows and replace it with Linux, they will no longer guarantee the machine.

That was the big con that Bill Gates perpetrated on the world. Each computer manufacturer should have come up with their own operating system, based around a central standard, then consumers would have had a choice. Gates sold the industry a monopoly. We have no choice.

And the thing is, Windows is crap, and Microsoft knows it's crap which is why they keep sending out patches and updates. They have built a crap product which is full of security weaknesses that these viruses are constantly exploiting. If Microsoft had done its job properly in the first place, there'd be no way for external viruses and worms to gain access to it. So given that it's weaknesses in the Windows program itself that leads to the viruses, why should I be forced to pay for an anti-virus program? Microsoft should be supplying them free. When you buy a car, bumpers and brakes aren't sold as optional extras, they're a vital part of the car. And a decent anti-virus program should be an essential part of Windows. Ditto Word. I always use pirated copies of Word because I don't see why I should pay extra to have something that seems to me to be essential for any computer users. Word, and Microsoft Office, should be part of Windows, end of story.

Anyway, enough ranting about Microsoft. I bought another computer this week, a mini-Sony, as a back-up in case I get hit by a virus again. It really is tiny but they keyboard is quite usable. The screen is small and the desktop logos are quite hard to see, but it's fine to work on for short periods. It's great for browsing the intenet and the battery life is over two hours. It cost about £600, which I guess is reasonable. Though, of course, Bill Bloody Gates took his cut. Yes, I now have another copy of Windows and the first thing the computer did when I switched it on was download a whole raft of patches and updates.... It never ends. 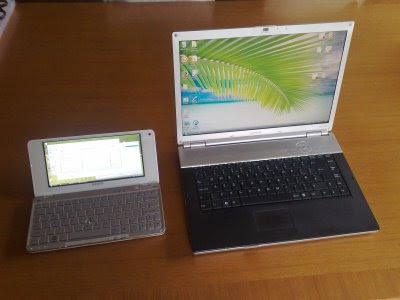 Posted by Stephen Leather at 3:07 AM

Dude, get a Mac, already.