Yet More Money From South Africa!

My name is Mr. Mbeki Lucas, I am a South African man by birth and resident in
Spain. I am a sale and account manager in a financial Consultancy firm here in
Madrid. My Company is mandated to source for reliable investors in the World
over to invest available funds in profitable business ventures.

Please, get back to me to enable me forward more information to you all we need
is to ascertain your credibility, resourcefulness and experience.

I earnestly await your response.

May I have the pleasure of introducing myself? I am Mr. Brown Shabangu a senior staff and chairman of Tender Board Committee on the award of contracts in Department of Works and Housing here in South Africa . I got your email from an international directory on lawyers and advisers on international business in my quest to find a trustworthy person on whom I can repose confidence for colossal international money transaction. My aim of sending this "business proposal" to you is to solicit for your assistance and co-operation to transfer some huge amount of money into your account overseas. Therefore, this communication should be held in high confidence.

My colleague and I in the Department of Works and Land Affairs wish to transfer into a safe and secured account overseas, the sum of US$32,500,000.00 (Thirty Two Million Five Hundred Thousand United States Dollars) which is over-invoiced amount from contracts we awarded to foreign contractors who have been duly paid on completion of their various contracts. This money right now is in a coded account in the Reserve Bank of South Africa . However, by virtue of our position as civil servants, we cannot acquire these funds in our names or in the names of companies here in South Africa . I was therefore asked by my colleagues on trust and sincerity to look for a reliable international outfit partner abroad into whose account the sum of US$32.5 Million will be transferred. We have agreed on the following sharing ratio if you accept our proposal. Seventy percent (70%) for us and Thirty percent (30%) for you the Account owner.

My choice of you for this transaction is basically hanged on your field and profession, hence this business proposal. If you are interested in this deal, I will require some information from you in order to affect the transfer of the money. Please, be informed that we shall commence processing of claims of payment once we receive your interest from you, and the funds will get into your account within Five (5) working days by Telegraphic Transfer (T.T). Note that this transaction is 100% risk free. I will appreciate, If you will send your response via email as indicated above.

Mr. Brown Shabangu
Posted by Stephen Leather at 3:34 AM 2 comments: 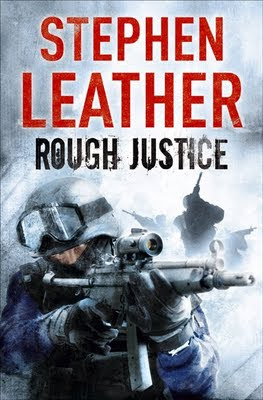 Hodder have just sent me the proposed cover for the new Dan Shepherd book, which will probably be called Rough Justice, though Jack Higgins did use the title recently. I like Rough Justice and hope that gets used, though I do have Dark Justice as a fallback position. The book should be on the shelves in July next year.
Posted by Stephen Leather at 1:52 AM 1 comment:

Ham Sandwiches Can Kill You!

Just read a report from a leading cancer charity warning parents not to giver their kids ham sandwiches. What annoys me is that the idiots who sent out the press release are paid for out of charitable donations.

Trust me, I'm a (former) biochemist - ham sandwiches will not give you cancer. Nor will bacon butties.

I for one won't be giving any of my money to the WCRF, they are obviously more concerned about pushing us towards a nanny state and less concerned about looking for a cure for cancer. Nothing in moderation - that includes ham sandwiches, cigarettes and alcohol, and probably most recreational drugs - will kill you. My daughter eats ham, and bacon, and ice cream, and she's as fit as a butcher's dog.


Parents should not give their children ham sandwiches in their packed lunches, a charity has warned.

Youngsters need to get into the habit of avoiding processed meats like ham, salami, hot dogs and bacon, it said.

According to the World Cancer Research Fund (WCRF), there is "convincing evidence" that eating processed meat increases the risk of bowel cancer.

While there is no specific research on eating the meats in childhood, the charity said the evidence in adults was too strong to ignore.

Children should therefore adopt a healthy eating pattern from the age of five and avoid processed meat, it said.

Marni Craze, children's education manager for the WCRF, added: "If children have processed meat in their lunch every day then over the course of a school year they will be eating quite a lot of it.

"It is better if children learn to view processed meat as an occasional treat if it is eaten at all."

The WCRF is also urging parents to avoid lunchbox fillers that are high in fat and calories.

Foods such as sugary drinks can cause weight gain, and obesity in adulthood is linked to cancer, it said.

The charity warned that parents may be misled by packaging or where a product appears on a supermarket shelf or website.
Posted by Stephen Leather at 4:39 AM 2 comments:

Posted by Stephen Leather at 5:55 AM No comments:

You Couldn't Make It Up!

Just finished going through the edits of Nightingale, which will be published in January next year. All good, though Hodder still can't decide on a title. They've yet to improve on just Nightingale, so we'll see what else they can come up with.

I'm really keen to see what Hodder does for a cover. I bet it will involve a single figure walking away, which is a theme I see in lots of covers these days. The last time I did a book tour something like a third of the books in the Top 20 fiction list had a single (male) figure on the front, walking away. It's become a cliche so I hope I get something better for Nightingale!

Have almost got to 140,000 words on the new Dan Shepherd book, which will be published next summer. That's much longer than I thought it was going to be, but it's all good stuff! There are three seperate plot threads which is why it's so long and with hindsight I think two would have been enough!

The theme of Dark Justice is police vigilantes and I touch on corruption, so I was fasinated to read this today. An amnesty for Scotland Yard cops who have been misusing their corporate credit cards. Seems the cops are to busy to do a full investigation so pretty much everyone involved has been let off! I just shake my head in amazement....

Scotland Yard chiefs have agreed a secret amnesty for more than 1,000 officers and staff who misused corporate credit cards, it has been revealed.

Senior officers were so overwhelmed by the number of cases they decided the card holders would not be punished - deciding instead that the staff, the vast majority of whom worked in counter terrorism and other specialist crime inquiries, would be given "training and guidance".

More than 300 people were initially referred to anti-corruption detectives when evidence emerged their claims were potentially fraudulent.

Of these cases, 50 were passed to independent investigators. Three officers have since been convicted of criminal offences and two more await trial.

Jenny Jones, of the Metropolitan Police Authority, said training and guidance is "not enough" and some disciplinary action should be taken. She said: "I find it unacceptable that the police have just let these officers go with guidance. They must have known what they were doing was wrong."

Members of the MPA, the force watchdog, have been told privately how an initial sift of accounts exposed the scale of the problem.

Internal auditors decided 1,183 people who used a card, but did not break the law, should be put to one side and labelled "category B". These cases included those who purchased personal items and later repaid the money or bought equipment that should have been purchased by other means.

Meanwhile, claims found to be "potentially unacceptable", including cases of suspected fraud, were labelled "category A" and passed to anti-corruption detectives. Inquiries into abuse of the credit card system by officers are expected to continue until next March, two and a half years after they first began.

A total of 3,533 officers and staff were issued with the cards and at one point £3.7 million of public money was unaccounted for. The majority of this money has been paid back, but legal action is expected against two officers who owe £82,000 and £1,100.
Posted by Stephen Leather at 1:08 AM 4 comments:

Just got this. Guy can't even be bothered to spin a reasonable story!

I am Barrister Fred Adams. I am reaching you in regard of handling an
investment portfolio.

I am soliciting your assistance in repatriating this funds and property
left behind by my late client before it is been confiscated by the
government and declared unserviceble by the bank where the huge deposit is
lodged. My Client died intestate and every attempt to trace any member of
his family has proved unsuccessful and abortive.

Do note that your identity or country of origin does not matter. I will
give you more information upon your response.

You should respond by sending the following;

I humbly look forward to your soonest response.

Does God Talk To Archbishops?

I always figured that the really top religious figures actually do talk to God, and I really hoped that God talks to them. It would make me feel so much happier about the state of the world to know that lines of communication are open. But when the Archbishop of Westminster starts slagging off Facebook and Myspace, then I do start to think that perhaps he's winging it and speaking for himself rather than God. I think God has much more to worry about than social networking sites. Unless they're telling us what God wants us to hear I think religious figures would be better off keeping their mouths shut...

It is claimed that social networking websites such as Facebook and MySpace could leave teenagers traumatised and even suicidal.

The head of the Roman Catholic Church in England and Wales, Archbishop of Westminster Vincent Nichols, has warned that the sites encourage youngsters to build "transient relationships"

He has told the The Sunday Telegraph: "They throw themselves into a friendship or network of friendships, then it collapses and they're desolate."

He continued: "It's an all or nothing syndrome that you have to have in an attempt to shore up an identity; a collection of friends about whom you can talk and even boast.

His comments follow the inquest into the death of 15-year-old Megan Gillan, a student at Macclesfield High School in Cheshire who took a fatal overdose of painkillers after being bullied on the social networking site Bebo.
Posted by Stephen Leather at 7:48 PM No comments: