The Basement Stays High In The Charts 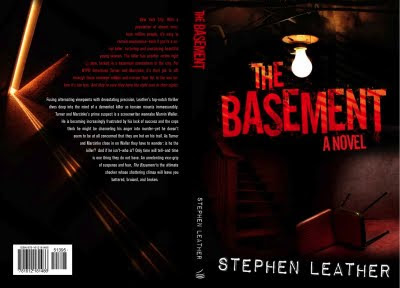 The latest eBook bestseller chart from The Bookseller magazine shows The Basement holding steady at Number 6. That's pretty good going considering that it was published in November last year. Lots of Indie books have come into the charts, some even reached the Top 5, but one by one they have dropped down again but The Basement has stayed. Why? To be honest, I am not sure. My other eBook bestseller, Once Bitten, was Number One over Christmas but now stubbornly stays below 50. I have no idea why it went down but The Basement went up.

I am amazed - and pleased - at the success of The Basement, which has sold well over a hundred thousand copies. But everything is going to change in November when Amazon will take over The Basement and Once BItten for their Amazon Encore programme. Effectively they will become the publishers of both books which means they will do all the publicity and marketing and I will take a back seat. It's going to be fascinating to see how things progress....

Here's what The Bookseller said:

Philip Stone, charts editor: It may have been downloaded more than 10,000 times in its first week on sale (according to publisher HarperCollins), but George R R Martin's A Dance with Dragons is conspicuous by its absence on this week's e-bestseller chart. Although it currently sits in the Top 10 in W H Smith's Fiction e-books chart, its lowly (comparative) positions in the Apple (14th), Waterstone's (61st) and Amazon.co.uk (24th) e-book charts mean it falls short of earning a place in The Bookseller's cross-retail Top 10 e-bestseller list

Benjamin Daniels' Confessions of a GP once again tops the chart thanks to solid downloads at Amazon (4th in the charts), Apple (1st) and Waterstone's (4th). Elizabeth Haynes' Into the Darkest Corner is the only new entry in this week's list, charting in seventh position. Sales of the £7.99 r.r.p. title will have been helped by the fact it has been discounted to just 99p on Amazon's Kindle store thanks to its position in the Kindle Summer Sale promotion.

Positive reviews will also have helped downloads—the book has received an incredible 141 five-star ratings out of 155 customer reviews. Such a five-star whitewash is so rare it is almost suspicious, but to those who say ratings/reviews matter little when it comes to decision-making, I offer you this evidence: I've just downloaded it.

Me Interviewed On Radio 4 About EPublishing

Last week I was interviewed on Radio 4's You and Yours program about ePublishing. It was fun to do and what was great was that Sam could come with me to watch the interview being recorded. And I met Scottish actor Bill Paterson in a corridor. Last time I met him was 27 years ago in a corridor in Radio Clyde. He didn't remember me but I managed to nick his BBC ID as a souvenir!

YOU CAN HEAR THE INTERVIEW HERE
Posted by Stephen Leather at 10:41 AM 1 comment:

More Money From The FBI!

This just in! From the FBI in NIgeria!

I am Agent Mark Wailers and am here in Nigeria as an FBI delegate that has been delegated to investigate this fraudsters who are in the business of swindling the citizens of out great nation America.Please be informed that during my investigation i got to find out that there is a huge sum of $15 million that has been assigned in your name and this fraudsters are busy swindling you without any hope of receiving your fund.

NOTE: The only fee you were suppose to pay from the beginning is the sum of $400 meant for logistics before the transfer of your fund can commence depending on how you want the transfer made to you.

The transfer can be done in three ways;

1)Through Bank to Bank wire transfer.

2)Through ATM card to be shipped to you through the courier service.

3)As a Bank Draft/Cheque to be delivered to you also through the courier service.

Get back to me urgently with the details before for urgent transfer of your fund to you without delay.

I shall expect your response as soon as you receive this email.

Best Regard,
Agent Mark Wailers
Posted by Stephen Leather at 1:40 AM No comments:

Great Write-Up For The Basement!

The Basement gets an honourable mention in today's write-up of the UK eBook Bestseller list produced by The Bookseller magazine! The Basement is still in the UK Top 10 and has been there for most of the last eight months!

This is what was in The Bookseller:

Philip Stone, charts editor: Three books in Amazon.co.uk's "Kindle Summer Sale" ("hundreds of books priced just £2.99 or less") earn places in the e-bestseller list Top 10 this week: police intelligence analyst Elizabeth Haynes' début novel, Into the Darkest Corner; Penny Feeny's 1979-set That Summer in Ischia; and new number one Benjamin Daniels' Confessions of a GP. All three are selling for just 99p at an average discount of 90% off their print edition r.r.p.s. Lucy Diamond's Sweet Temptation, Lyndsay Russell's Making it Big and C J Box's Three Weeks to Say Goodbye, three other 99p members of the same promotion, narrowly miss out on places in the Top 10.

Long-time e- book bestseller, Stephen Leather's The Basement clocks up a 20th week in The Bookseller's e-bestseller list in 2011. Benjamin Daniels is Leather's nearest rival in the longevity stakes, the doctor's Confessions of a GP having charted 16 times this year.

Leather's The Basement is the latest in a long line of e-books to have acquired a helpful subtitle on Amazon—this time "serial killer thriller with a breathtaking twist". Others include Saffina Desforges' Sugar & Spice (The Controversial Psycho-sexual Thriller), and Jason Krumbine's Fruitbasket from Hell (For Fans of Jasper Fforde and Terry Pratchett). How long such subtitles will last remains to be seen—earlier this year Amazon.co.uk removed "For Fans of Stieg Larsson and Dan Brown" pretty promptly from the title of Louise Voss and Mark Edwards' Catch Your Death.

Incidentally, The Basement has received a solid four stars out of five on average from 346 reviewers at Apple's iBookstore although, intriguingly, one of the most recent ("slow to start and took a bit of getting into but on the whole enjoyable") received just three. The reviewer in question? A Mr "Stephen leather". Hmm....